There was a bug with Neo / Ipsum release 1.0.5 that has since been rectified. This was brought to my attention by a user and rectified as soon as I realised what was going on. Simple fix based on a simple oversight.

If anyone is having problems with Neo / Ipsum don’t hesitate to bring it to my attention. I am more than happy to help.

And if you just want to say “Hi” that is appreciated too.

So anyone following along knows I put Neo / Ipsum up on the download page ready for use. My father, Ric Bretschneider, who worked on PowerPoint for over 17 years made a post on his website and sent e-mails to a bunch of people he knows in the Microsoft MVP program. As such my site has had a spike in traffic and I have been getting some nice feedback. What I did not expect was for someone to make  a review of my Add-in less than 24 hours after release. Here it is from Chantal Bossé:

The video is in french and I can’t understand a word of it (besides my name) but I can understand what is happening on screen and make a few educated guesses about what she is saying.

I am simply floored by this. Never in my wildest dreams did I expect to get this level of reaction from this (at least not this quickly).

If you want to see my father’s blog post it is also right here: http://blog.ricbret.com/?p=1165

I almost have Neo/Ipsum ready for distribution. The coding is about 95% done with a few more things to do for security, but all of the functionality is in. I also have a Demo version almost ready, I need a little time to review the changes between the versions but it should be ready at the same time as the full version if not sooner. After the coding things I have left to do I have a few things to figure out as far as selling the product but I have some good leads and better contacts for figuring it out.

Since it occurs to me I haven’t shown off what it looks like here are some screen shots of the program’s interface. 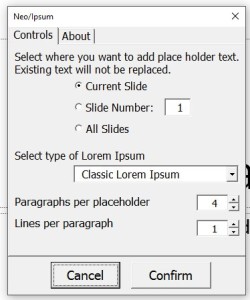 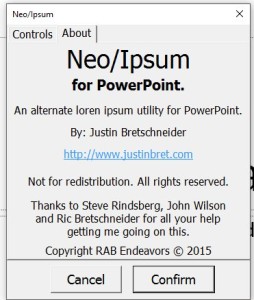 As the title says Neo/Ipsum is almost ready for release, just have a few more visual iterations, bug checks, and the like and it should be ready. In the mean time I have a page on my site describing Neo/Ipsum (and Lorem Ipsums in general). The page will be under the Projects tab along with my Games, Artwork, and Writings or you can find it here.